About the Champlain Philharmonic Orchestra: 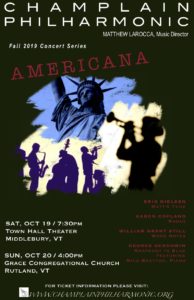 In the spring of 2004, two VSO string players decided to enhance the thriving arts scene surrounding Addison County by forming a full orchestra. Violinist David Gusakov and cellist Dieuwke Davydov invited the community to audition, and then selected over 55 qualified string, wind and brass players to begin rehearsals at the Vergennes Opera House for a debut performance. With David Gusakov as Music Director and Dieuwke Davydov as Manager, on November 15th 2004, the Champlain Philharmonic Orchestra made its debut performance at the Middlebury College Center for the Arts, with acclaimed pianist Diana Fanning playing Beethoven’s Piano Concerto no. 3, receiving wonderful reviews for a sold-out performance. And so the Champlain Philharmonic Orchestra (CPO) was born.

Establishing a set of spring and fall concerts, the orchestra continued to grow and thrive. In the fall of 2010, under the direction of Paul Gambill, the orchestra branched out by presenting many professional soloists and engaging audiences with varied programs, including a concerto for bagpipe, premiering a piece for electric violin, and collaborating with youth and schools.  The CPO still maintained its community roots by performing with the Middlebury Community Chorus, featured pieces by local composers Peter Hamlin, C. Robert Wigness and offered local student competitions for high school students.

As the resident orchestra of the Town Hall Theater in Middlebury, the CPO performs regularly in Middlebury and now in Rutland County, at Green Mountain College in Poultney with over a dozen guest soloists and some past guest conductors such as Troy Peters, Larry Hamberlin, and Dr Yutaka Kono.  Matthew LaRocca became music director in 2017.